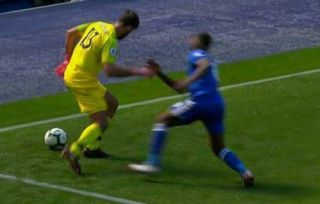 Liverpool summer signing Alisson has been slammed on Twitter for his dreadful error as he conceded his first goal for his new club against Leicester City.

The Brazil international arrived from Roma this summer with the reputation not only as a great shot-stopper, but also one of the finest goalkeepers in Europe with a ball at his feet.

We’ve certainly seen plenty to be impressed by with Alisson, who produced a sublime piece of skill against Brighton last week, even if it looked a risky move.

Today, Alisson has paid the price for his overplaying as he lost the ball to Kelechi Iheanacho before Rachid Ghezzal scored for Leicester to put them back in the game.

WATCH: Alisson will not want to see this one again ?

Liverpool's goalkeeper has his pocket picked by Kelechi Iheanacho and his cut-back is finished off by Rachid Ghezzal. Game on!

Liverpool had looked comfortable at 2-0 up after first-half goals from Sadio Mane and Roberto Firmino, but Alisson’s error has changed the complexion of this game in the final stages.

It’s fair to say some Liverpool fans are not happy, while others are mocking the 25-year-old finally being punished for his style of play…

Always going to happen when keepers get too cocky

Loris Karius: “My mistakes for Liverpool will never ever be beaten.”

Alisson had it coming. Just freakin’ clear it!!!

Van Dijk with a shit back pass.

Idiots all over. IDIOTS