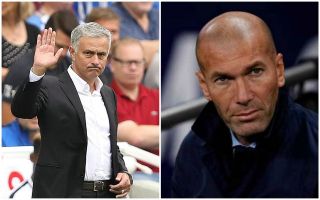 This is something of a surprise as earlier this week RMC reported that the France international wanted out of the club and was left baffled by his omission from the squad to face Tottenham on Monday night.

However, CaughtOffside have been told that this decision may have been influenced by rumoured United managerial candidate Zinedine Zidane, who has spoken to both Martial and fellow Frenchman Paul Pogba, according to sources close to the former Real Madrid boss.

The Times have also reported of the 22-year-old being willing to pen a contract extension due to the belief that he could out-live Mourinho at United, and the Red Devils boss suggested all that is left is to wait for an official announcement on the player.

“Martial – we have to wait for it to be official,” Mourinho told reporters, as quoted by Goal. “At this moment it is not official.”

This sounds like United fans won’t have too long to find out what’s going on with Martial, who has been a big fan favourite at the club, but whose decision to commit long-term would certainly be something of a surprise and a major statement by the club – perhaps hinting at the direction they’re moving in in terms of the manager’s position as well.

The Guardian reported earlier in the summer that Mourinho wanted to sell Martial, who has rarely been a starter since he took over from Louis van Gaal in Manchester.

If sources close to Zidane are to be believed, it may well be that Martial’s imminent new contract is a sign of change in the United dugout in the near future, especially if results continue to go badly.

The Daily Mail have recently suggested defeat at Burnley this weekend could be enough to seal Mourinho’s fate.