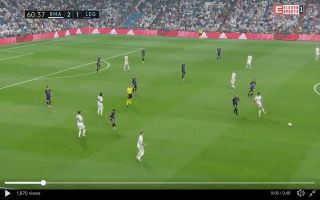 Real Madrid definitely turned on the style after an unflattering first half performance against Leganes in their 3rd La Liga fixture of the new campaign.

The sides went into the break even following a spectacular goal by Gareth Bale which was followed by a quick reply from Guido Carrillo.

Striker Carrillo on loan from Southampton scored from the spot to ensure the sides went into the break on even terms.

Despite some first-half troubles Madrid looked like a rejuvenated side after the break and Los Blancos scored 3 goals in quick succession which put the tie out of Leganes’ hands.

Captain Sergio Ramos then scored from the spot after Marco Asensio was brought down to complete Madrid’s second half overhaul of their opponents.

Check out some of the gaols below:

It took a while to get to this decision, but VAR does the business again. @Benzema's header restores @realmadriden's advantage. #RMALEG #LaLiga #PureFootball pic.twitter.com/H1ntk5GuEO

The second great team goal of the night for @realmadriden, the second goal for @Benzema, and the third for the team. Ronald-who? #LaLiga #RMALEG #PUREFOOTBALL pic.twitter.com/vjhA4SQzfk

The goals are coming thick and fast in Madrid, as @SergioRamos buries one from the spot. Wonder what @Benzema, with a brace, thinks of that? #LaLiga #RMALEG #PUREFOOTBALL pic.twitter.com/8fzXS7asZ7

The second half showing from Julen Lopetegui’s side was a joy to behold for fans as Madrid again look to have an impressive season following last season’s record breaking third successive Champions League victory.