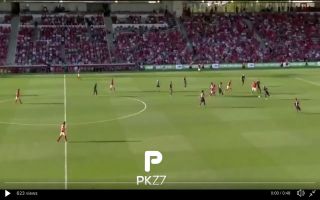 The 19-year-old reacted angrily to a challenge by Nimes’ Teji Savanier by shoving the Nimes player to the ground very violently.

Both Mbappe and Savanier were subsequently sent off for their unsporting like involvement in the incident.

Check out Mbappe’s angry reaction which resulted in the red card below:

Mbappe – a sensation at this summer’s World Cup in Russia, will now be suspended for being sent off and will be a big miss for PSG until he returns from his ban.