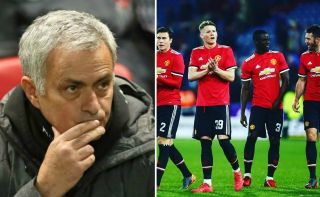 Some Manchester United fans are still not entirely happy despite the team looking like getting back to winning ways against Burnley this afternoon.

The Red Devils are 2-0 up at half time against Sean Dyche’s side, and look comfortable as Romelu Lukaku has pounced on some poor defending from the home side to net a first-half brace.

Still, one player seeming to attract plenty of criticism on Twitter at the break is right-back Antonio Valencia, with plenty of fans seemingly keen for manager Jose Mourinho to use youngster Diogo Dalot instead.

The Portuguese starlet joined United this summer but has not been seen for the senior side yet.

Clearly, however, it is felt that Valencia is not playing well enough to justify his continued inclusion in the first XI, which perhaps makes sense for an ageing player who hasn’t been a natural defender for most of his career anyway.

Also Valencia got to go now that Dalot is healthy. He genuinely raises my blood levels.

Better football all around for us. Valencia has stopped offering anything,on the other hand. Everything is coming from left side. Dalot needed fully fit ASAP #MUFC

Our right side doesn’t exist

Play Valencia at right wing for width , or stick pereira there ?????

Dalot better be ready to dispossess Valencia like Shaw did Young. No time.

Amazing how much Shaw's improved form has helped the squad attack … I beg Dalot is ready after the break and shines. I'm not out here to bash Valencia and Young but clearly upgrades and needed and hopefully on the way

Can’t wait for Dalot to comeback, had enough of Valencia

Dalot need to get fit ASAP doe, Valencia’s crossing is too shit