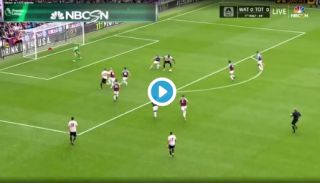 Romelu Lukaku has his second goal of the afternoon for Manchester United against Burnley.

The Belgium international struck from close range just before the break after some comical defending from the home side, as seen in the video clip below.

Lukaku is now on a hat-trick for United as Jose Mourinho’s side finally show some sign of returning to form after a slow start to the season.

The Red Devils lost back-to-back games against Brighton and Tottenham, but have found it much easier against a poor Burnley side today.

Just watch here as the ball bounces around, with Burnley clueless as it finds its way to Lukaku to steer home.

Lukaku fires his 2nd goal today. Brilliant buildup and movement by the team. ??????

TAKE A LOOK AT THAT! HAT-TRICK? pic.twitter.com/Vpwom59cie