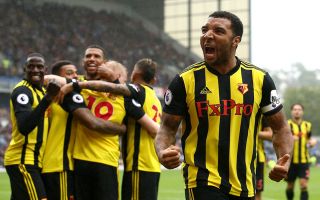 Watford’s Troy Deeney inspired a dream comeback for the Hornets against Spurs this afternoon. The second half produced fireworks after a very closely matched first half.

The first half didn’t provide much action except for a potential penalty appeal when Clint Kabasele slid in on Lucas Moura who was played through into the box by Dele Alli.

The second half opened with nothing to separate the two sides until a defensive mix up broke the deadlock in the 53rd minute when Watford midfielder Abdoulaye Doucouré chested the ball into the back of his own net. 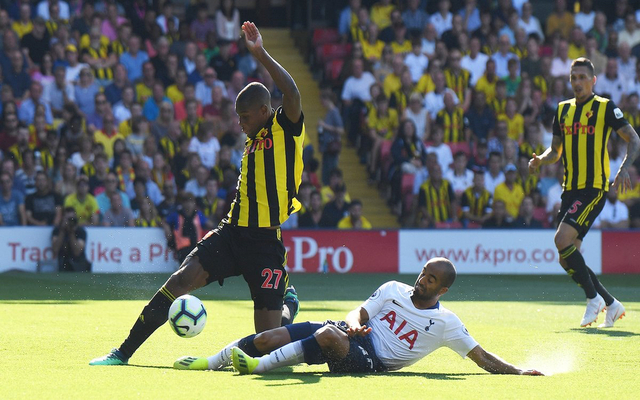 Kabasele and Lucas Moura battled on several occasions during the game

Conceding such a rare own goal would usually deflate a side but it was the complete opposite for Watford who looked fired up and their passion and desire paid off handsomely.

Only minutes after conceding Troy Deeney bullied defender Davinson Sanchez off the ball and crossed the ball into the box and defender Toby Alderweireld only had the crossbar to thank preventing him from own goal misery.

In the 69th minute Troy Deeney headed home from a Jose Holebas free kick, the target man won a mismatch with Harry Kane to equalise for Watford.

Deeney’s header was his landmark 100th goal for the club putting him in the history books alongside Hornets legends.

100 – Troy Deeney has become the fourth player to score in 100 matches for Watford in all competitions, after Tommy Barnett, Ross Jenkins and Luther Blissett. Legend. pic.twitter.com/vSDWuSA1zr

Watford continued to pile on the pressure which resulted in Craig Cathcart scoring the winner in the 76th minute – Tottenham conceded from another set piece.

Jose Holebas turned provider again – this time from a corner crossing the ball into the box where Craig Cathcart was left uncontested to head home.

Holebas has been a revelation this season scoring once and providing 4 assists from left-back with only 4 games gone in the season so far.

Deeney was a deserved man of the match for the Hornets using his strength to bully the Tottenham defence on several occasions.

Tottenham’s defence were just not strong enough to deal with one of the Premier League’s best target men.

Here are some clips of Deeney muscling off defenders this afternoon:

One guy you don’t want it with is Troy Deeney pic.twitter.com/rS6D53fY3K

“We have the best defenders in the prem” Spurs FT

This afternoon proved to be record-breaking for Watford with the Vicarage Road outfit beating Tottenham in a league fixture for the first time since 1987, and the first time ever in the Premier League.

Watford have also now won their first four top-flight matches of a season for the first time ever in the club’s history.

Mauricio Pochettino may have unwillingly released the blueprint on how to defeat his Spurs side this afternoon.

Premier League managers will encourage their forwards to press the Spurs back line and be physical with the Spurs defence because of the success Watford had today. Not to mention Spurs inability to defend from set pieces today.

Spurs showed today that their defence couldn’t handle the pressure a player like Deeney brings to the pitch.