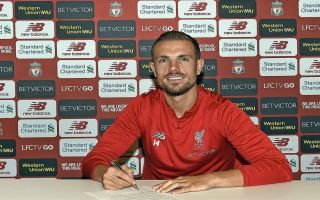 Liverpool captain Jordan Henderson has put pen to paper on a new long-term contract which will keep him at Anfield for many years to come.

The Englishman joined the Red’s in 2011 from Sunderland and has since gone on to make over 280 appearances for the club. The reliable midfielder has developed a sterling reputation as a versatile and tenacious player over the last seven years and has led by example as the team’s skipper since 2015.

Henderson has only played a bit-part role so far this season as Liverpool have made a perfect start to the new Premier League campaign with wins against West Ham, Crystal Palace, Brighton and Leicester City. New arrival Naby Keita filled his position in the opening three matches but he did make a return to the starting line up at the King Power Stadium on Saturday.

According to Liverpool’s official website, the 28-year-old has today signed a fresh long-term deal with the club, which will see him remain a loyal servant at Anfield for the foreseeable future.

I couldn’t be happier to have dedicated my long term future to this great club. I’ve loved every minute of my time at Anfield so far and have already made memories to last a lifetime but I’m convinced the best is yet to come.I love this club and I can’t wait for the future. #YNWA pic.twitter.com/jcSpLRu1Nl

He expressed his delight after announcing the news on Monday, as he told LFC.com: “I’m very happy to have signed a new contract for a long period of time. I’m absolutely delighted.

“It doesn’t seem like too long ago when I signed my first one – it feels like yesterday, really – but a lot has happened since then.

“There is no other place in the world I would rather play football. I want to be here for as long as I can be.

“I’m so privileged to have been a part of this club for so long, and hopefully even longer now.”

Henderson’s career journey at club level to date has been one that defines the meaning of steady progress, having gradually worked his way up the pecking order at Liverpool to recently emerge as one of the club’s most consistent performers.

Red’s boss Jurgen Klopp may well rotate the England international more often this season now that Keita is on the scene, along with Fabinho who also arrived this summer after moving from AS Monaco, but there is no doubt that Henderson will remain an important part of the German’s plans throughout the season and beyond.