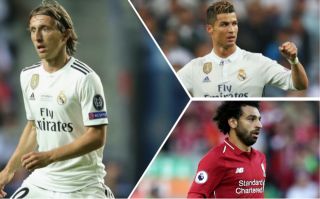 FIFA have announced the top three shortlist for this year’s ‘The Best’ award, and some fans are claiming that one star in particular may not be deserving of his place in this year’s top three.

MORE: “Definition of unselfish” – These fans laud Lionel Messi for this particular moment in Barcelona’s 8-2 thrashing of Huesca

All three of these global superstars have a decent shout of winning this year’s award, all for different reasons.

Ronaldo was the star of the show for Real in the Champions League, as Los Blancos claimed their third consecutive title in the competition.

Modric was also a key part in Real’s Champions League run, with the midfielder also playing a huge role in Croatia reaching the World Cup final this summer.

Salah was absolutely phenomenal for Liverpool last year, as he bagged 44 goals in all competition, helping the club reach their first Champions League final since 2005.

Despite this, some fans have described Salah’s nomination for the award as undeserving, with some pointing out the fact he was included in the award’s shortlist over Barcelona great Lionel Messi.

Here are a few tweets from fans claiming Salah is undeserving of his place on the shortlist for this year’s ‘The Best’ award.

And considering the season Messi had last year, can you really blame them?

How exactly does Salah deserve to be over Messi?

Messi not nominated for FIFA Best Player Award is a disgrace. We don’t deserve this GOAT.
(Ps. Before you ask, Salah doesn’t deserve to be there)

That’s the point, you plug. Messi was ineligible, so should be Ronaldo. And Salah doesn’t deserve to be in the top 3 too

Salah had a good season but he doesn't deserve to be in the last 3 but Greizeman. Messi di3 make he sleep somewhere. This be the totally cheat!

why does salah deserve to be there above messi..no one can give a good explaination.