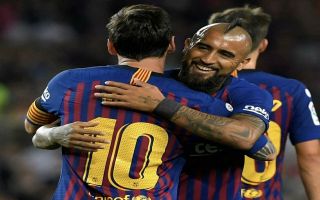 Barcelona captain Lionel Messi has praised the club’s new signing Arturo Vidal for adding a much needed physical element to the team.

Vidal arrived at the Camp Nou this summer from Bayern Munich having spent the last three years of his career in Germany with the Bundesliga champions. The Chilean midfielder has extensive experience playing in top European sides, having also plied his trade at Juventus at Bayer Leverkusen in the earlier years of his career.

In recent years, Barcelona have struggled to make an impact in the Champions League, with some experts suggesting that the team has been missing a rugged leader in the middle of the park. Vidal was brought in to change that dynamic and he certainly has the attributes to provide exactly what Ernesto Valverde’s team have been missing as they look to challenge on all fronts once again this season.

SEE ALSO: Barcelona and Real Madrid set to do battle for star who Barca view as future replacement for Gerard Pique

The new La Liga campaign is going well for the Blaugrana so far as the team has secured three wins out of three, most recently thrashing Huesca 8-2 at home on Sunday.

Team captain and five-time Balon d’Or winner Messi has heaped praise on Vidal in the wake of their early success, insisting that he will be a vital part of the team’s set up going forward – as per The Daily Star.

“We defend with the ball. Players like Arturo Vidal are necessary.

“He’s the type of player who does everything well, with the ball and also with the muscle that he has.

“Games are getting more complicated and difficult, physique is important and we are always the smallest.”

If the first few games of the new season are anything to go by then Barcelona certainly look strong enough to improve on their performance last year, with their new leader in midfield primed and ready to help the team strive towards new glories over the next 12 months.