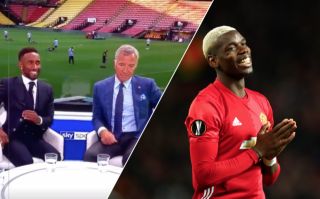 Having missed a penalty for Man United in the club’s 2-0 win over Burnley yesterday, midfielder Paul Pogba didn’t have the absolute best of games for the Red Devils.

Despite his failed spot-kick attempt, Pogba still put in a decent performance for Jose Mourinho’s side, however one pundit still had words of criticism for the Frenchman.

Speaking on Sky Sports’ ‘Super Sunday’, Pogba was hounded by Souness for comments he made earlier in the season, however the former Liverpool star was then embarrassed by the host of the show, David Jones.

Souness was left with egg on his face after Jones’ comment about United’s win against the Clarets on Sunday, a moment that we’re sure the pundit will want to forget about in a hurry.

Here’s a clip of Souness being embarrassed. You can almost see his face turn red the second Jones stops speaking!

We win and all Souness can talk about is Pogba. Bellamy waiting for him to mention it and Souness fuming when he gets shut down at the end. Night made. ???? #mufc