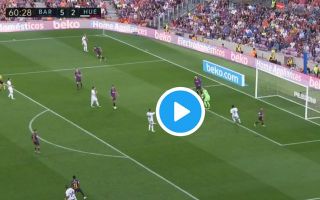 Barcelona ran out 8-2 winners over Huesca at the Nou Camp on Sunday despite an early scare with Lionel Messi pivotal in securing all three points.

The Catalan giants fell behind after just three minutes, but they eventually showed their class to outgun their opponents and maintained their perfect start to the La Liga campaign.

Naturally, with so many goals, there was plenty of quality on show from the champions but this goal was arguably the pick of the bunch given the quality of the Philippe Coutinho assist to spot the run of Messi and produce a perfectly-weighted pass.

The Argentine icon did the rest and found the back of the net, but Coutinho’s pass even drew a wonderful reaction from the Barcelona faithful, as heard in the video below.

Messi, Luis Suarez, Ousmane Dembele, Ivan Rakitic and Jordi Alba were all on the mark in the rout, with Barcelona now winning three in three to start the season, scoring 12 goals while conceding just two.

That in turn pushes them above rivals Real Madrid at this early stage of the campaign, albeit Julen Lopetegui’s men also boast a 100% record.

Six of the absolute best for @FCBarcelona. The ball from @Phil_Coutinho and then, it’s that man again. It’s #Barca 6 – #Huesca 2. #LaLiga #PureFootball #BARHUE pic.twitter.com/xCP0IMO1IY