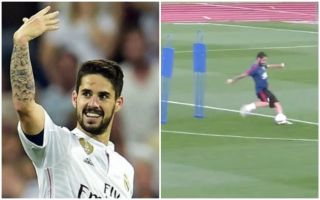 Real Madrid star Isco has enjoyed a fine start to the season and he appears more than ready to make his mark for Spain during the international break.

The 26-year-old has started the season well for Los Blancos as he looks to establish himself as a key figure for Julen Lopetegui’s side.

However, his focus will switch to Spain this week as he reports for duty as part of Luis Enrique’s first squad as they prepare to take on England and Croatia in the UEFA Nations League.

Judging from his quality in training, as seen in the video below, it looks like Isco is more than ready to get going as he showed he’s equally as capable with his right or left foot.

The playmaker produces two delightful finishes, one with either foot, and showcases just how talented he is having put in the hard work to ensure that he can deliver with both feet when some players struggle in these positions even with their favoured side.

Isco will hope to play a fundamental role for Real Madrid and Spain this season, and there’s no doubt he’ll continue feature prominently if he continues to impress in training like this…