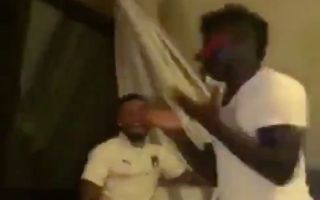 Mario Balotelli and Lorenzo Insigne are no strangers to playing pranks on each other, but the latter has seemingly won the battle for now.

The pair are currently on international duty after receiving call-ups from Roberto Mancini, with the Azzurri set to take on Poland and Portugal in the UEFA Nations League over the next week.

While both will be desperate to make a positive impact if given an opportunity, they’ve seemingly been enjoying the camp ahead of the first game on Friday night, as seen in the video below.

Insigne decided to reignite their prank war and opted to hide behind a curtain as Balotelli made his way into the room before the diminutive Napoli forward jumped out and gave him a massive scare which almost saw him drop his phone as it comes flying out of his hand.

Balotelli appears to laugh it off as he walks away, and given his history of off-the-pitch antics, it would come as no surprise if he is already planning payback for his compatriot.

We look forward to seeing what you come up with Mario…