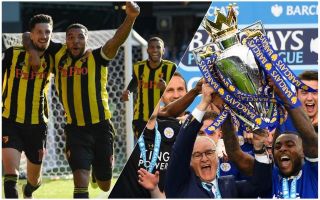 Watford have raised one or two eyebrows by winning all four of their opening four Premier League matches this season to put themselves third in the table, behind only Chelsea and Liverpool on goal difference.

The Hornets have a strong squad and an impressive manager in Javi Gracia, and continued their fine start by claiming a big scalp in their 2-1 win over Tottenham at the weekend.

Watford will face tougher tests yet, and take on Manchester United at Vicarage Road after the international break.

Still, someone’s noticed a spooky stat regarding Gracia’s side, who have already started to draw some comparisons with the Leicester City team that stunned world football by winning the Premier League title in 2015/16.

The Foxes started that year 5000/1 outsiders to win the league, but the superb form of the likes of Jamie Vardy, Riyad Mahrez and N’Golo Kante saw them win it fairly comfortably in the end, clinching the first title in their long history.

We’re unlikely to see a repeat anything quite like it again any time soon, but this somewhat spooky stat has started doing the rounds, and you have to admit it does make you wonder…

Watford’s record in the Premier League is identical to that of Leicester in 2014/15, the season before they earned their shock title win.

Now, while it’s silly to be superstitious about these things, you have to admit that’s a pretty big coincidence.

The main issue this term is that, while Leicester took advantage in a season where teams like Chelsea, Manchester City, Liverpool and Manchester United were all massively below their usual standards, the top flight looks far stronger in 2018/19.

City ran away with the title under Pep Guardiola last season, while Chelsea and Liverpool have made fast starts after some strong work in the summer transfer market.

It would surely be a much bigger challenge for Watford to keep up this kind of form, though of course, stranger things have happened…