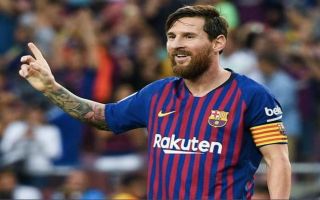 Barcelona maestro Lionel Messi is eager to improve his ability from the penalty spot after several high profiles failures over the last few years.

The diminutive Argentine is widely regarded as one of the greatest footballers of all time, having won everything there is to win in the game at club level with Barcelona whilst dazzling audiences around the world with his incredible talent in the process.

Messi’s spellbinding ball control and unerring composure in front of goal have led to him scoring over 600 career goals, most of which have come at club level with Barcelona as he has become their all-time record goalscorer.

However, over the past few years, the 31-year-old superstar has struggled to perfect his technique from the penalty spot, with his current record from 12 yards reading as 71 goals scored in 88 attempts.

A 77% success rate from the spot is not befitting a man of his undeniable stature in the game and even he acknowledges the need to improve his record, as he told Catalunya Radio this week.

“The penalties. I’d like to be more effective,” said Messi. “It’s very difficult. It’s not the same to practise them as it is to take them in a game.

“You can have a plan or have an idea about what to do, but when the moment comes it’s much more difficult to do it than it looks.

“Today’s goalkeepers save some penalties that the ones in the past wouldn’t have.

The Argentine striker has hit the ground running at the start of the new La Liga campaign, hitting four goals in Barcelona’s opening three matches as the Blaugrana aim to retain the league title they won last year.

Regardless of whether Messi is able to improve his numbers from the penalty spot, it is refreshing to know that even someone as wildly talented as him is still trying to improve. He comes agonisingly close, but his latest admission just goes to prove that no one is perfect all the time.