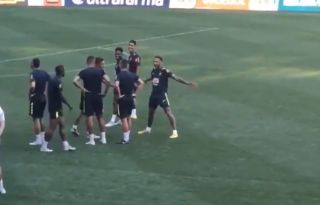 As the international break gets underway, Selecao manager Tite has been getting his player’s into shape in training this week ahead of a showdown with the USA on Saturday in the ‘Kickoff Series’.

Neymar has made a strong start to the season with PSG, scoring four goals in the team’s opening four matches of the new Ligue 1 season. He seems to have put the disappointment of exiting the World Cup in Russia at the quarter-final stage with Brazil behind him and looks primed and ready to have an impact on the world stage once again.

SEE ALSO: Real Madrid and Barcelona to rival each other in race for 21-year-old Brazilian starlet

Mundial has released a video on Twitter showing the Brazilian scoring in training as the national team continues its preparations and he chose to mimic the celebration Ronaldo has become renowned for over the years with Portugal and Real Madrid.