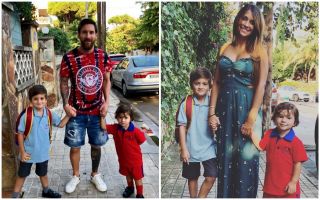 As he enjoys time off during the international break, it has seemingly given Lionel Messi the opportunity to take his kids to school.

The Argentine icon and his partner Antonella Roccuzzo have shared images on Instagram, as seen below, of the pair dropping two of their three boys off.

Instead of being miles away from his family and travelling during the break, Messi will surely be loving every minute spent at home and that means spending more time with his family.

We can only imagine the scenes when he arrives at their school and the reaction it probably still gets, but he’ll undoubtedly relish it and Roccuzzo looks equally delighted as her boys continue to grow up fast.

It won’t be long though before Messi is back at work for Barcelona after the international break, as the Catalan giants will take on Real Sociedad on September 15. Messi will no doubt have his family there to support him in return as they look to continue their fine start to the campaign.

For now though, it looks like he’s loving life at home…