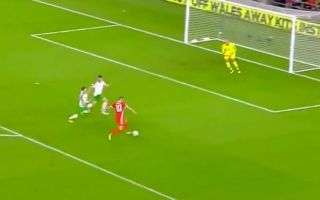 Wales were in fine form for their UEFA Nations League clash with the Republic of Ireland on Thursday as they took a 3-0 half-time lead.

Goals from Tom Lawrence and Gareth Bale had put Wales 2-0 up after just 18 minutes, but there was more to come from the hosts at the Cardiff City Stadium.

Ramsey latched onto a pass into the box and the Arsenal man kept his composure to produce a great finish, as seen in the video below, to give his side a commanding lead heading into the interval.

It’s the ideal start for Wales in their League B, group 4 meeting with their rivals, and Gunners fans will be equally as pleased too having seen their midfield ace grab a confidence-boosting goal while away on international duty.

As for Ireland though, they’ll be desperately hoping to produce a reaction in the second half to at least come away from the game with some pride after what was undoubtedly a disastrous opening 45 minutes.