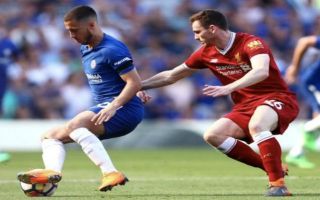 Chelsea have got off to a flyer at the start of the 2018-19 Premier League campaign, winning all four of their games to lead the table on 12 points along with Liverpool and Watford.

Hazard, in particular, has shone for Maurizio Sarri’s men despite only starting two matches so far, even managing to make a huge impact with a goal and an assist as a substitute against Huddersfield and Arsenal respectively.

The 27-year-old seems to have transferred his displays on the international stage in the summer at the World Cup with Belgium back to club level, after starring for his country as they reached the semifinals in Russia.

The midfield maestro is currently training with Roberto Martinez’ squad ahead of the Red Devils opening Nations league fixture against Scotland on Friday, where he will face off against Robertson, the Liverpool defender who is plotting his downfall.

According to The Daily Mail, the Red’s left-back gave his opinion on Hazard’s current standing in the game, as he told reporters: “He is up there. He is probably in the top five at the minute.

“I played against him many a time and even if he is having a quiet game he can pop up at any point and turn a game and that is what we are up against.

“He is special. The way he turns and gets at players, he can commit two or three defenders at a time and that is a very special trait, there is not many that have it but he has it.

“He has been unbelievable for Chelsea and Belgium and he is somebody we will need to watch.

“The problem with Belgium is you can’t focus on Hazard as someone else pops up.

‘That is one of the problems of playing a world-class team, you have to be aware of all their threats and we will be ready for them and do our best to stop them.”