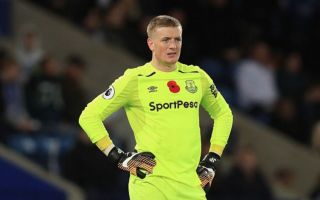 Everton number one Jordan Pickford has insisted that he would never make the same mistake Alisson did for Liverpool against Leicester City.

The Red’s are joint top of the Premier League while the international break continues, after winning all four of their games at the start of the 2018-19 campaign.

Jurgen Klopp’s men have also only conceded one goal during that time, with the defence taking all the plaudits for their recent success given the fact that the team has often been maligned for shipping goals in the past.

The centre-back partnership of Virgil Van Dijk and Joe Gomez has had a lot to do with that, along with new summer signing Alisson, who was brought in from AS Roma to replace Loris Karius as the club’s first choice shot-stopper.

However, after impressive displays against West Ham, Crystal Palace and Brighton, the Brazilian let himself down with a horrendous error last time out at the King Power Stadium, allowing Kelechi Iheanacho to dispossess him and set Rachid Ghezzal up to score.

According to The Daily Star, England number one Pickford has given his take on the incident on Friday, stating that he would avoid putting himself in the same situation, as he told reporters: “I try not to do tricks because I don’t want to be caught with it. It’s a risk.

“It’s a style of play and I think that’s the way Liverpool want to play as well.

“You’ve got to accept where mistakes will happen and it’s about not making the next one.

“For me, I’m going to try not to put myself in that position to make those mistakes.

“You don’t want to get too comfortable if you’re winning and start trying to be a No 10 player.”

Liverpool will face their toughest challenge of the season so far when the players return to club duty next week, as they travel to Wembley to face Tottenham on the 15th September.

Supporters will hope that Alisson can put his costly lapse in judgement behind him and get back to basics as the Red’s look to maintain their 100% record against Mauricio Pochettino’s impressive Spurs side.