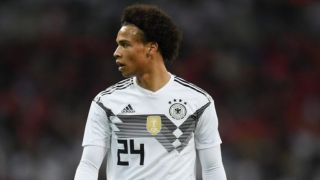 An official announcement was made on Friday afternoon from the German FA confirming that winger Leroy Sane had left the team for ‘private reasons’.

Much was made of the decision, especially in light of recent comments from compatriot Toni Kroos who questioned Sane’s attitude, as noted by BBC Sport.

With that in mind, with Germany confirming in their tweet below that Sane had left the team hotel after talks with Joachim Low, many were quick to assume that those ‘private reasons’ were perhaps related to possible issues within the camp.

Following discussions with head coach Joachim Löw, @LeroySane19 has left the team hotel in Munich for private reasons and will not be available for #GERPER. #DieMannschaft pic.twitter.com/rCgnqeHhIc

The 22-year-old failed to make the Germany squad for the World Cup earlier this summer which sparked a surprised reaction for most fans given his impressive form for Man City last season.

In turn, this was arguably seen as a potential continuation of those problems too.

However, according to Bild, there is an innocent explanation for it, as it’s claimed that Sane has simply been given permission to return home to be with his pregnant partner who is due to give birth to their first child.

For those without a Bild subscription, the report is reiterated by ESPN’s Man City correspondent Jonathan Smith in his tweet below, thus suggesting that there is no disciplinary reason behind Sane’s exit from the Germany camp and it is simply due to genuine personal reasons.

While he will now miss the clash with Peru on Sunday, he’ll hope to be back available for Man City when domestic football returns as they face Fulham on September 15.

By then, he will now seemingly have an additional member of the family and less speculation over his international future, assuming that the latest reports from Germany are indeed accurate.

As has been reported in Germany, the reason Leroy Sane left the national team is because his girlfriend is due to give birth to their first child.