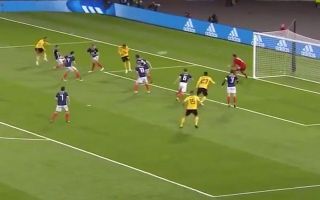 Belgium struck immediately in the second half against Scotland on Friday night, with Eden Hazard rifling home this brilliant effort.

The visitors took a lead in the opening 45 minutes courtesy of Romelu Lukaku’s easy finish, and they wasted little time in doubling that advantage after the interval.

After working some space for himself on the left, Hazard opted to take the shot on himself and he thundered his left-footed effort into the back of the net to put Belgium in complete control of the game.

The Chelsea ace has been working his way to full fitness to start the season after his exploits at the World Cup earlier this summer, and he certainly looked sharp on this occasion and showed his world-class talent with a great goal.

Now, the Blues will be hoping that he can pick up from where he left off at Hampden Park when they take on Cardiff City next Saturday, with Maurizio Sarri’s men looking to maintain their perfect start to the Premier League season.

“A touch of genius”

Eden Hazard fires Belgium 2-0 ahead and it appears to be game over for Scotland.