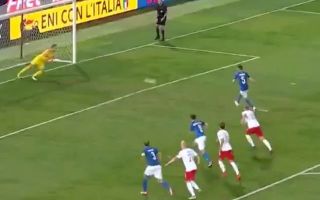 Italy midfielder Jorginho stepped up and slotted home from the penalty spot in their UEFA Nations League clash with Poland on Friday night.

The Azzurri fell behind at the Stadio Renato Dell’Ara after Piotr Zielinski’s opener in the first half as Roberto Mancini’s side struggled to create anything of note.

In turn, it needed a key moment in the game to give them an opportunity to get back into it and after Federico Chiesa was fouled in the box, the hosts were awarded a penalty in the latter stages to have a chance of snatching something from the encounter.

Jorginho stepped up, and the Chelsea midfield maestro showed real composure and class as he sent the goalkeeper the wrong way to level the scores.

The 26-year-old has been a fundamental part of Maurizio Sarri’s side so far this season, just as he was when the pair were at Napoli previously.

Having now seemingly established himself as a key figure in Mancini’s plans for Italy too, he’ll hope that he can chip in with more goals when possible as Italy will face Portugal next week looking to put on a more convincing display.

Chelsea’s Jorginho beats West Ham’s Fabianksi from the spot and Italy are level.