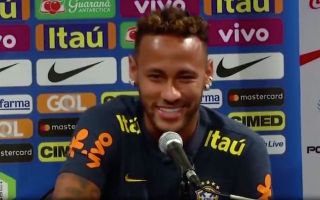 After spending a lot of the summer on the ground after being constantly fouled at the World Cup, Neymar came in for plenty of criticism amid allegations of diving.

The Brazil superstar arguably didn’t do himself any favours by perhaps being over-theatrical with his reactions, but there was no denying that he attracted plenty of hard tackles too.

He has now hit back at those suggesting that he is a diver though, as he tried to explain in a press conference this week, as seen in the video below, that ultimately defenders aren’t going to let him go past without putting up a barrier and his speed and movement will naturally lead to coming-togethers.

That is ultimately going to be expected and fouls will follow, but if he cuts out the dramatic reactions, then the Paris Saint-Germain forward will likely avoid being scrutinised further.

Time will tell if he can shed that arguably unfair tag as his career progresses, but he will undoubtedly continue to be targeted by the opposition too such is his importance to his club and country.

People all over the world see Neymar as “a diver.”

Here is his explanation… pic.twitter.com/dFXcH1ACLx