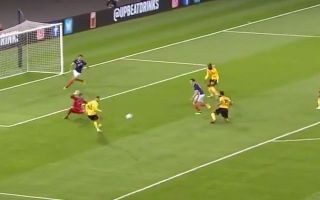 Romelu Lukaku was on target for Belgium in their international friendly against Scotland on Friday night as the hosts gave them a huge helping hand.

Roberto Martinez opted to field a strong side at Hampden Park, but it took them time to find a breakthrough as they were forced to wait until the 28th minute.

SEE MORE: ‘Shut up and get on with it’ – Ex-Premier League boss advises Man Utd on Paul Pogba

It eventually came with Scotland making a real mess of playing out from the back as Mousa Dembele pounced initially to win back possession high up the pitch before Thorgan Hazard kept his head and squared it across the goal for Lukaku to have an easy finish.

That was the 25-year-old’s 41st goal for Belgium, and he probably won’t have many easier ones either as he’ll have his teammates to thank for doing all the hard work.

Nevertheless, the Man Utd star was in the right place to apply the finish, and he’ll hope to continue to add to his impressive tally for his country while also taking that goalscoring form back with him to United when domestic football resumes next weekend.

“All too easy for Belgium”

Scotland try to play out from the back but Belgium win the ball and Lukaku has the easiest of finishes.