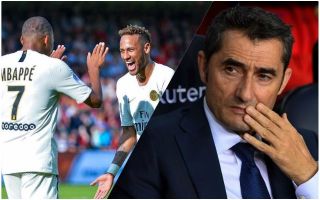 Neymar is reportedly itching for a return to Barcelona and has even spoken to one club executive about a transfer back to the Nou Camp.

However, according to the Daily Mirror, the Catalan giants see little need to bring the Brazil international back for a variety of reasons.

Neymar rather controversially left Barcelona for Paris Saint-Germain last season, moving for a world-record £200million after PSG triggered his Barca release clause, according to BBC Sport‘s report at the time.

It seems the 26-year-old may be having doubts about this move now, but the Mirror claim his old club feel they’ve adequately replaced him in attack, signing Ousmane Dembele, Philippe Coutinho and Malcom since he left.

It remains to be seen if any of them can truly emulate Neymar in terms of sheer talent, but the Mirror add that Barcelona are not keen on the circus that follows Neymar, with his father and others surrounding him perhaps not worth the hassle.

Neymar has discussed a transfer back to Barcelona

The former Santos star has done well with PSG, but the Mirror suggest his most likely next destination is Real Madrid.

This makes sense for Los Blancos, who need a superstar signing to replace Cristiano Ronaldo after his transfer to Juventus this summer.