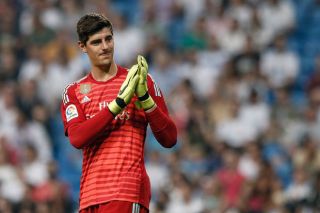 Real Madrid goalkeeper Thibaut Courtois has revealed a decision was made over his transfer from Chelsea as early as March.

The Belgium international moved from Stamford Bridge to the Bernabeu this summer in a deal that has left something of a bad taste in Chelsea fans’ mouths.

This fan account went on an epic rant about Courtois the other day, slamming the player and his behaviour towards the end of his time at Chelsea and since his exit.

The 26-year-old has since responded saying he’s saddened by any bad feelings felt towards him from Chelsea supporters, as he still loves the club and feels some of his words may have been taken out of context.

Still, Courtois did also let slip that his transfer to Real Madrid has been on the cards for months, saying a decision was made in March, meaning he knew about his departure for the final couple of months of last season.

It’s therefore unlikely that Chelsea fans will feel too much better about their former goalkeeper’s words.

CFC ended up signing Kepa Arrizabalaga to replace Courtois, with the young Spaniard looking a fine signing, though an expensive one that the club could perhaps have ideally avoided as it only came following the loss of a proven, experienced world class performer.

“It makes me feel sad and obviously they don’t know all the truth,” Courtois is quoted by Sky Sports.

“I think in March the decision was already made and I thought the club would accept it.

“Then because the transfer was closed I did not show up because I thought it better not to disturb the team and the squad.

“If I did go there maybe, I didn’t want to be toxic, so obviously it is a pity because I love Chelsea.

“I loved playing there and I am happy to have won two Premier Leagues, a league cup and an FA Cup. Hopefully it will turn around.”