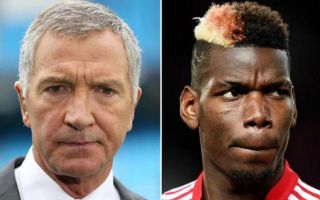 A look back through almost all of Graeme Souness’ comments about Paul Pogba show he’s had something of an agenda against the player ever since he first sealed his transfer to Manchester United.

The France international is in the spotlight at the moment after a tricky start to the season, during which he’s once again failed to look as convincing for his club as he has for his country.

Despite a superb World Cup for the French national side as they won the tournament, Pogba is back to under-achieving again in a United jersey, whilst his comments to Sky Germany have also fuelled more speculation over his future at Old Trafford.

But whatever your opinion of Pogba, he’s clearly got the talent in there somewhere and hasn’t been *that* bad for United, having shone in the side for the first half of last season before a dip later on.

Souness, however, has clearly had it in for the 25-year-old from the beginning, as this run-through some of his old quotes by the Daily Mirror shows.

‘It’s not the poor lad’s decision, he didn’t decide how much was going to be spent on him, but I think £89m is way too much,’ the former Liverpool man told Sky Sports when he joined from Juventus.

‘For that money, you’re expecting to get the finished article. He’s a long way off from that.

Think Pogba and Souness need to sit down and have a beer together. Maybe even hug it out.

‘The strikers are the ones that normally go for big, big money because they’re the ones who decide the games, nine times out of 10. Pogba got 10 goals in 49 games last year. He will get some goals but he’s not going to be a Luis Suarez, who got over 50 goals for Barcelona last year.

‘How many games is he single-handedly going to win you? I think the price they have paid for him is all out of sync. If you analyse it in that context, the price isn’t right. It’s way too much on him.’

Now, to be fair on Souness, that’s actually ended up being a pretty decent prediction, but it’s the way he just refuses to lay off the Frenchman that grates a little.

‘I don’t see him doing enough special things,’ the Scot is quoted by the Mirror.

‘You spend that kind of money to make a difference in the big games. I don’t see him this season changing any of the big games because of the ‘brilliance’ he’s shown.

‘He does eye-catching stuff, which with all due respect to people who don’t understand the game so well, (they) go ‘wow, wasn’t that great play?’

Graeme Souness has been more right about Pogba than he has been wrong. The dabber has major commitment issues. Get him out the club, he’ll never be a #mufc legend.

‘I see him use his athleticism. I see him use a trick, a flick. But I don’t see someone on the ball who’s really understanding the game as a midfield player.

‘I’ve never seen him run a game and I think you spend that kind of money for the big guys to change the big games and he’s not done that enough.’

Then he said Pogba should be more like Marouane Fellaini for crying out loud!

‘He’s a bit of a YouTuber. I want to see Paul Pogba do what Fellaini does,’ Souness was quoted in the Metro.

‘There are question marks about France,’ he is quoted in the Mirror. ‘Like Jose Mourinho at Manchester United, Didier Deschamps struggles to find a system that gets the best out of Paul Pogba.

‘He should draw a line under that. You can’t trust him as a central midfielder and, ultimately, that’s how Deschamps will see it. He could use Pogba as an impact substitute.’

What next from Souness? Can Pogba ever do anything to shut him up?