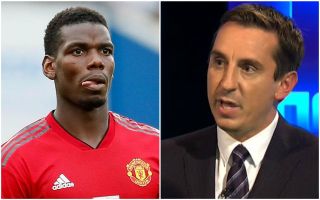 The 31-year-old sent an angry message regarding Pogba’s conduct recently, following the France international fuelling speculation over his future by failing to rule out leaving the club.

Although Crolla does not name Pogba specifically in the tweet, it seems pretty clear who he’s talking about as the 25-year-old just this week told Sky Germany he didn’t know for sure what would happen with his situation in the next few months.

Now he gives an interview how he’s under contract for Manchester United but who knows what will happen in a few month.
We’re all dick heads at time but for me that’s too much dick head behaviour so if he wants to go let him go!!
Disrespecting the club!

Fans reacted pretty angrily at the time and Crolla seems to be one of those, and by ‘liking’ the tweet, Neville seems to be endorsing this message.

The Independent are among those reporting that Pogba wants a transfer to Barcelona, and also that United may now increasingly be moving towards being ready to replace him if the money was right, with Jose Mourinho keen on signing Lazio’s Sergej Milinkovic-Savic in midfield. 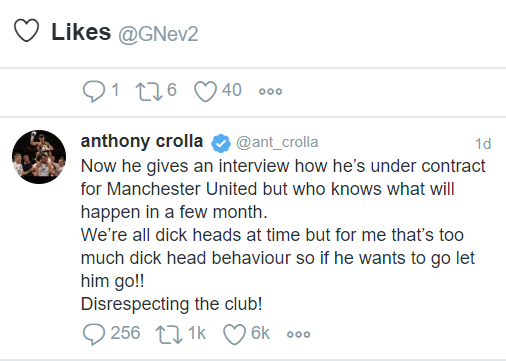 It would be interesting to hear precisely what Neville thinks about Pogba, but given his undying love for the Red Devils, it would not be surprising if this recent behaviour didn’t go down too well with the former defender, which he seems to be hinting at here after liking this Crolla tweet.

This is not the first time Neville has appeared to side with manager Jose Mourinho on the ongoing Pogba debate, having been quoted by the Sun back in March as saying: ‘He’s been nowhere near good enough. His great strength is he plays with freedom and like he’s playing in the park with mates.

MORE: Who will be the Next Man Utd manager?

‘No wonder Jose has left him out in the last few weeks a number of times.’