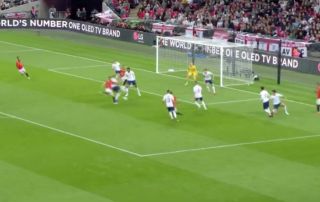 England were only able to enjoy having the lead against Spain for a matter of seconds tonight, as midfielder Saul Niguez hit back almost immediately to draw La Roja level against the Three Lions.

Gareth Southgate’s side took the lead through a fine team goal that was finished off by Marcus Rashford, however the lead lasted mere seconds as Saul levelled for the away side from Spain’s very next attack.

England fans will be somewhat encouraged with the start they’ve seen from the Three Lions, however they will be hoping for their side to be better defensively for the remainder of this Nations League tie.

Here’s a clip of Saul’s fine volley against England, one we’re sure Southgate and Co didn’t have in the script given the fact the home side scored just seconds before.

Another great team goal, this time for Spain and Saul fires home under Pickford