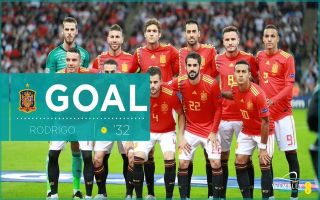 Spanish striker Rodrigo fired Luis Enrique’s men into the lead in the 32nd minute after below-par defending by England from an indirect Spanish free kick.

Midfield maestro Thiago Alcântara whipped the ball towards the near-post and star striker Harry Kane failed to keep track of his man, allowing Rodrigo to poke the ball into the net.

England seemed to be operating in a zonal defensive shape which ultimately led to Rodrigo easily getting past his man and giving Spain the lead.

Spain take the lead
Rodrigo with the goal #ENGESP pic.twitter.com/EcViZAmeAS