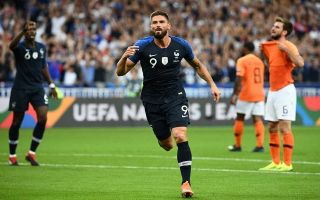 This evening’s Nations League encounter between France and the Netherlands proved to be a fitting endorsement of the newly-formed UEFA Nations League competition.

France went into halftime with a 1-0 lead thanks to a goal from golden-boy Kylian Mbappe but it was the second half of the closely contested encounter that provided fireworks and stole the show.

Netherlands forward Ryan Babel seemed to turn back the clock with his equaliser against France in the 67th minute, in what was first competitive goal for the Netherlands in over 13 years.

31-year-old Babel didn’t hint at his reactions slowing down at all by getting in front of World Cup sensation Benjamin Pavard and producing a great instinctive finish to equalise against the World Champions.

Ryan Babel beats his man at the back post and Netherlands are level against France.

To Babel’s dismay Netherlands’ found themselves picking the ball out of their net only 7 minutes after Babel’s goal when Frenchman Olivier Giroud scored a stunning volley to restore France’s lead.

Benjamin Mendy provided a trademark thunderous cross into the box and Giroud got in front of Liverpool superstar Virgil van Dijk and volleyed into the back of the net.

Van Dijk should have marked the dangerous frontman much more tighter and his momentary lapse in concentration may prove to be costly as Ronald Koeman’s Netherlands side could have easily walked away from the Stade De France with a point.

Check out Giroud’s goal below:

Stunning volley from the Chelsea striker who was picked out by Benjamin Mendy and France are back in front.

Giroud’s goal cemented him into the history book alongside some French footballing legends.

In the company of legends. ?? pic.twitter.com/WkZE2PYDLF

France were deserved 2-1 winners this evening in what was their first match back on home turf since lifting the World Cup trophy this summer in Russia.