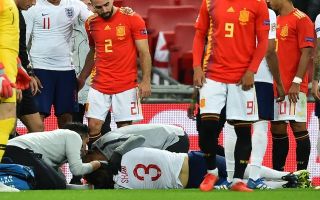 Man Utd and England ace Luke Shaw gave everyone a scare on Saturday night, but he has reassured all that he’s fine after a nasty head injury.

The incident occurred in the second half of England’s defeat to Spain at Wembley, as after a collision with Dani Carvajal, Shaw hit the ground hard to spark concern.

After requiring a stretcher and an oxygen mask, many would have been fearing that the injury-plagued ace had suffered another setback, but it appears as though it isn’t as concerning as it initially seemed.

“Luke is awake and alert, having been assessed by our doctor and given an X-ray. He’ll stay with us overnight for further observation, with another update to come in the morning,” a statement from England confirmed, as per Sky Sports.

Further, the 23-year-old also tweeted the below to offer an update on his condition, and so it doesn’t sound as though he expects to be out for too long which will be a major relief for him and Man Utd given the impressive start to the season he has made.

Thank you for all the love and support I am doing fine and am in the best hands. I’m a fighter so I will be back soon! ???

After being the subject of public criticism from Jose Mourinho as well as struggling to prove his fitness and form at Old Trafford to cement his place in the starting line-up, Shaw has finally made the left-back position his own to start this campaign.

In turn, he’ll be desperate to avoid any more injury problems, and it sounds positive for the time being that he won’t be sidelined for long, albeit he will continue to be monitored given the nature of the injury.

The Red Devils return to action when they take on Watford next Saturday evening, and so Mourinho will be hopeful that a week is enough time for Shaw to potentially make a full recovery and be available for selection.