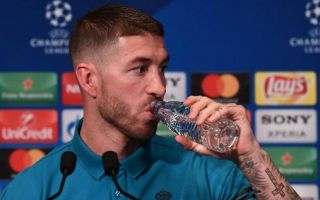 FIFA will hand out their ‘The Best’ award on September 24, and Sergio Ramos has seemingly taken a dig at Cristiano Ronaldo with his pick for who he wants to see win it.

The Juventus ace will go up against Luka Modric and Mohamed Salah for the award later this month in London, with all three having memorable years to look back on.

From Ronaldo’s 44 goals in 44 games for Real Madrid to win another Champions League trophy to Modric being a fundamental part of that run too along with reaching the World Cup final.

Meanwhile, Salah enjoyed an incredible debut season at Liverpool, scoring 32 goals in the Premier League which set a new record as he fell agonisingly short with the Reds in Europe.

In turn, it’s going to be difficult to pick a winner of the three, but Ramos has thrown his support behind Modric, while also seemingly aiming a swipe at Ronaldo and Salah with his comments.

“We will see (the winner). He’s a great friend and there are few players I feel so proud to have him on my team,” he is quoted as saying by Mundo Deportivo. “Modric deserves to win The Best, even though others have more marketing: he is one of the few who, if he wins, I’d be happy as if they gave it to me”.

It could be argued that it’s actually just a fair statement as both Ronaldo and Salah undoubtedly get more marketing and attention that Modric, and so that could perhaps influence things when deciding who gets the award while Ramos seemingly has made no secret of wanting his current teammate to win it over his ex-teammate.

Based on footballing reasons alone though, Modric may not have a better shot at winning it, and so for the influence that the 33-year-old has had for club and country, it would be no real surprise if Ramos gets his desired outcome. Time will tell though if Ronaldo or Salah pips the Croatian international to it.