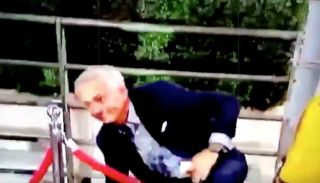 Jose Mourinho completely embarrassed himself as England vs Spain on Saturday, as the Man United boss took an unfortunate tumble over some red rope.

The incident came before England’s 2-1 loss to La Roja on Saturday night, and it was surely one that left the Red Devils boss embarrassed to say the least!

Having already had a tough start with United this season, it seems like everything’s going against Mourinho at the moment!

Here’s a clip of the former Chelsea boss’ unfortunate fall at Wembley on Saturday.

Although we do feel sorry for Jose, it is still pretty funny!

? | A video of Jose Mourinho falling at Wembley has emerged. pic.twitter.com/xiHHPkx0mP