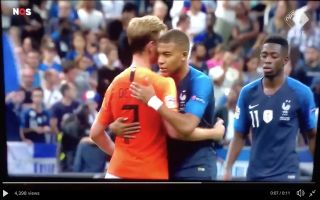 Kylian Mbappe opened the scoring in the 14th minute before Ryan Babel shocked the World Champions by scoring a equaliser in the 67th minute for the Netherlands.

Olivier Giroud was on hand to rescue Les Bleus on their homecoming to the Stade De France after winning the World cup.

Giroud scored a spectacular volley by in the 74th minute

Mbappe and De Jong showed maturity for their young age and the pair were both considered as the best players on the pitch tonight for their respective sides.

De Jong’s performance caught the eye of fans across the world.

The 21-year-old midfielder demonstrated a calmness and composure in midfield in what was the Ajax star’s first senior start for his national side.

A performance of this level certainly takes some doing and the sky is the limit for the impressive youngster.

It is no surprise that De Jong has been linked with a move away from Ajax after such impressive performances for club and now country.

Caught Offside understands Barcelona’s senior players, including Philippe Coutinho, are aware that the La Liga champions are pushing to get a deal in place in the coming weeks which will see De Jong join them ahead of next season.

see the midfielder as a priority target as they look to build for a future without stars like Ivan Rakitic and Sergio Busquets.

Kylian Mbappe continued to establish himself as one of the most dangerous players in world football, the 19-year-old Paris Saint Germain forward got himself into a great position to score France’s first goal of the game.

After the final whistle the youngsters decided to swap shirts check out a video of the conversation between the two below: