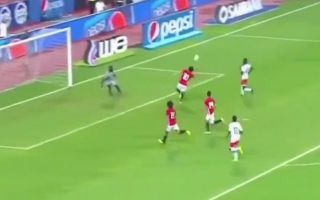 Liverpool forward Mohamed Salah produced a fine performance for Egypt in their 6-0 win over Niger in their Africa Cup of Nations qualification clash on Saturday.

The 26-year-old was back in action for his country after a subdued World Cup this past summer having been rushed back from the shoulder injury he suffered in last season’s Champions League final.

This was undoubtedly more like the prolific and dangerous Egyptian international that we saw at Anfield last season and to start this campaign. As seen in the video below, Salah was a constant menace for the Niger backline who were overrun and outclassed in a one-sided affair.

In truth, Salah should arguably have had more goals and assists but for some wayward finishing, and so he was forced to be content with a brace of his own along with two assists as he seemingly continued to carve out goalscoring opportunities at will with fast, direct attacking play from Egypt throughout.

However, it wasn’t all positive as he did miss two penalties during the game too, albeit he tapped in the rebound on the second one to get his name on the scoresheet.

Liverpool fans will certainly hope to see more of this when they take on Tottenham next weekend as they look to maintain their perfect start to the Premier League campaign. Salah already has two goals and two assists in four league games so far this season, and so he certainly looks in great form already.

Few clips of Mo Salah performance vs Niger. Finished the game with 2 goals and 2 assists. He could have easily had few more. Just watch…. pic.twitter.com/xIpF06ct0M