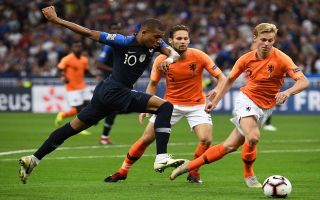 Kylian Mbappe got France off to a flying start in the 14th minute giving Les Bleus an early lead in this evening’s mammoth Nations League encounter.

Netherlands’ star-studded winger could only hold his head in his hands after his misplaced header back to the Netherlands goal was picked up by Blaise Matuidi who played the ball across the box, where Mbappe was able to tap home.

Mbappe is now regarded as one of the best players in the world following his impressive performances for the national team during this summer’s World Cup. France defeated Croatia in the final to lift the trophy.

Mbappe has been hailed as a future Ballon d’Or winner and Paris Saint Germain may achieve the spectacular feat sooner rather than later.

The boy wonder taps home to give France the lead after a gift from the Dutch.

@KMbappe opens it up in the 14th minute!! #Netherlands #FRANED