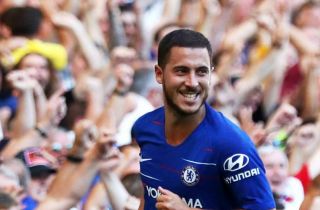 Chelsea defender Antonio Rudiger has given an honest answer when discussing where he ranks teammate Eden Hazard in terms of the best players in the game.

The 27-year-old has been a fundamental figure for the Blues since arriving in 2012, scoring 91 goals in 304 appearances while playing a pivotal role in winning two Premier League titles, an FA Cup and the Europa League.

However, in terms of individual recognition, the Belgian international has struggled to put himself amongst the likes of Lionel Messi and Cristiano Ronaldo for the biggest prizes in the game.

Whether that’s a lack of consistency or perhaps having not yet taking his game to the next level, Hazard remains short of that elite level in the eyes of many.

Not for Rudiger though, as he has placed his Chelsea teammate above the likes of Ronaldo and Neymar, and believes that only Messi is better than him.

“Mbappe is unbelievably fast, really good. To stop him, you have to do it as a team, because alone … good luck,” he told FourFourTwo. “But for me, the best in the world is Messi, then Hazard.”

To be fair to the German international, it’s an honest answer as few would put any player above Messi in their rankings given the world-class level of play that he has demonstrated for years.

Nevertheless, there will always be a temptation to stick by your teammate and give the obvious answer regardless, but Rudiger has been honest and Hazard will undoubtedly appreciate the fact that he has been placed above some huge names still.

However, it’s about proving that on the pitch as he enters the peak years of his career, and particularly with Chelsea making a positive start under Maurizio Sarri in the Premier League, he’ll be desperate to lead their charge towards major honours in the coming years.