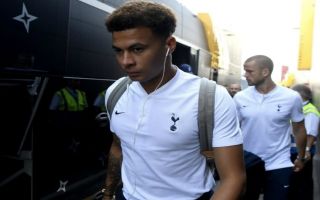 Tottenham midfielder Dele Alli should be fit to return to action against Newcastle this weekend, after sustaining a muscle strain on international duty.

The 22-year-old picked up the knock on Saturday evening during England’s 2-1 defeat against Spain at Wembley and has thusly been left out of Gareth Southgate’s squad for Tuesday night’s game Switzerland.

Alli has started well at club level in the Premier League this season, featuring in all four of Tottenham’s games in the early stages of the 2018-19 campaign. The English playmaker scored against Newcastle United on the opening day and has impressed for the Lily Whites with his influential performances from the middle of the park, which have helped the team win 9 points out of a possible 12.

It had been initially feared that Alli would have to miss weeks of action following his injury at the weekend but Three Lions boss Gareth Southgate has addressed the media today to re-assure Spurs and England fans, according to Football London.

Speaking in a press conference on Monday, he said: “He’s had a minor strain but I think he should be fine for his club this weekend.

“I thought Dele’s performance was good against Spain. He makes critical forward runs and he learned a lot from the game.”

Tottenham were beaten 2-1 by Watford last time out in the league at Vicarage Road, despite taking the lead in the top of the table clash. Both sides had 100% records going into the match, but Mauricio Pochettino’s men ultimately fell three points behind their opponents as well as Chelsea and Liverpool as a result of the defeat.

Supporters will hope that Alli returns to action fully fit and ready to display the fine form he exhibited before the international break as Spurs aim to bounce back in their bid to challenge for the title.