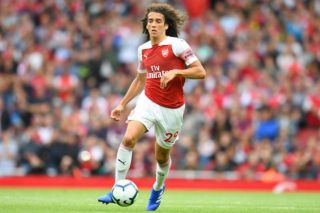 Ex-Arsenal striker Jeremie Aliadiere has revealed he advised Matteo Guendouzi to join the club because of their history for nurturing talent.

The 19-year-old has started all four of Arsenal’s games in the Premier League at the start of the 2018-19 campaign, impressing supporters and pundits alike with his composure in possession and eye for a pass.

New Gunners boss Unai Emery clearly already has a lot of faith in the young Frenchman, who arrived at the Emirates from Lorient in Ligue one over the summer for £7 million – as per ESPN.

Guendouzi’s performances have unfortunately been one of the few bright spots in an otherwise disappointing start to the season for the Gunners, as they have quickly fallen six points behind their rivals for a place in the top four as a result of losing their opening two matches against Manchester City and Chelsea.

However, back-to-back wins against West Ham and Cardiff City before the international break have served to steady the ship somewhat and the French starlet has continued to shine in the middle of the park.

Former Arsenal flop Aliadiere, who spent 8 years with the club but only managed to accumulate 51 appearances in total in the famous red shirt, has gone on record to state the part he played in helping Guendouzi to move to the Emirates, as he told Goal: “I knew when I first saw him that he had something special and that a lot of clubs would be after him.

“I said to him that for his development Arsenal would definitely be the right place for him.

“You can go to big clubs and never get a chance but Arsenal always give a chance to their young players. I thought it’d be good for him.”

The Premier League returns this weekend, with Arsenal set to face off against Newcastle United at St James’ Park on Saturday.

Supporters will hope that Guendouzi continues to display the cool head and technical prowess which earned him the club’s player of the month award for August, as Arsenal aim to continue their climb back up the table.