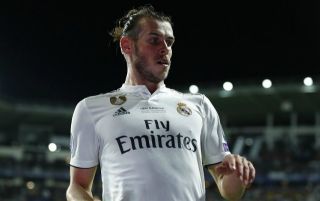 The departure of Cristiano Ronaldo this past summer has seemingly given several Real Madrid stars more responsibility so far this season, something that they appear to be relishing.

Julen Lopetegui’s side have collected maximum points in La Liga thus far, and one of those players to benefit has been Gareth Bale with the 29-year-old scoring three goals and providing an assist in his three league outings.

As the Welshman looks capable of stepping up and filling the void left behind by his former teammate, Lopetegui appears to have struck the right balance in the side with the likes of Karim Benzema and Isco also impressing.

However, it seems as though it isn’t quite perfect yet for Real Madrid as Don Balon claim that club president Florentino Perez is keen on signing Paulo Dybala from Juventus, a signing that would raise doubt over Bale’s position in the line-up with his injury track record cited as an ongoing concern moving forward.

This isn’t the first time that Dybala has been linked with a move to the Bernabeu, as noted by TeamTalk, but given the positive influence Bale has had for Lopetegui to this point, it seems difficult to understand as to why he would be the one to suffer if a deal was done for the Argentine international.

Meanwhile, the 24-year-old has played just 10 minutes of football in the last two Serie A games as coach Massimiliano Allegri seemingly struggles to get the best out of him alongside summer signing Ronaldo.

Should those issues continue, it will raise further doubts over his future but given how important he has been to Juventus over the past three seasons as they’ve continued their domestic domination, coupled with the quality that he possesses, it would seem like a major mistake on their part to let him leave.

Time will tell if a move to Real Madrid materialises, but with the likes of Isco and Marco Asensio as obvious similar style of players to Dybala, surely one of them would suffer as opposed to Bale who is establishing himself as the new talisman at the club.