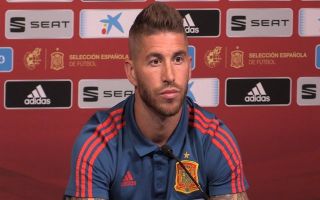 Real Madrid defender Sergio Ramos has opened up on his family receiving death threats following his collision with Mohammed Salah during his side’s Champions League final against Liverpool in May.

Real Madrid beat Liverpool 3-1 in last season’s Champions League final although Madrid’s success was overshadowed by the fact that Liverpool star Mo Salah was forced off with a shoulder injury following a challenge by Ramos.

Ramos was also labelled as the reason why Liverpool goalkeeper Loris Karius made costly errors for Madrid’s first and third goals in the Champions League final.

Some Liverpool fans accused the centre-back of deliberately injuring both players.

Ramos opened on the death threats his family received and the negative reaction to him by England fans after Spain’s 2-1 victory against England on Saturday evening.

Here are quotes from the defender obtained by ESPN:

“One tries to evade [the boos]. In the end you feel it, but I stay out of everything. It doesn’t affect my game.”

“I would have liked another reception because people only remember the action of the final, and nobody remembers the death threats that my family and my children received.

“It is a very sensitive issue that people maybe take as a joke about and [that’s why they] whistle in a great stadium like this. My conscience is very clear. I already explained [what happened], and I do not have to give more explanations.”

Ramos also talked about the collision with Mo Salah:

“As I said before, I have never tried to hurt a colleague. There are people who may have misunderstood it, but these are football things. It will not change anything in my game or in me.”

Check out a video of Ramos speaking to the media on the issue below:

"You never expect such a bad welcome."

Ramos is highly regarded as on the best central defenders ever and the 32-year-old has made over 150 international appearances for Spain and has been a mainstay in the national team since his debut in 2005.

Ramos was an integral member of the fearsome Spain side who basked in international glory winning the Euros in 2008 and 2012 as well as the World Cup in 2010.

Ramos has also collected a vast amount of individual honours during his career, most recently being named the UEFA Defender of the season for 2018.

It seems as though Ramos is looking to put the Champions League final behind him and move on with the new season.

Ramos will be as essential as ever for Real Madrid this season as Los Blancos look to maintain Europe’s best side this season, a challenge that will be even more difficult since Cristiano Ronaldo’s shock exit to Juventus.