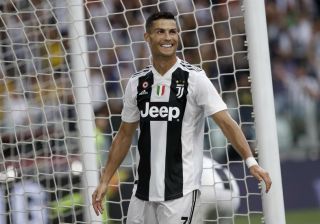 Napoli stalwart Raul Albiol believes that Serie A is a much stronger league than La Liga and says Cristiano Ronaldo might, therefore, not score as many goals.

Ronaldo swapped the Santiago Bernabeu in Madrid for the Allianz Stadium in Turin this summer, ending his 9-year stay in Spain with the European champions. Los Blanco’s record goalscorer has broken all kinds of records over the last decade or so at both club and international level, whilst also winning multiple Ballon d’Or awards in the process.

However, his start to life in Serie A with Juventus hasn’t been the straightforward transition into Italian football that he might have hoped, as he has failed to find the net in the opening three games of the new season.

Wins against Chievo, Lazio and Parma have seen Massimiliano Allegri’s men storm to the top of the table as they aim to win their 8th domestic league title in succession, but their £99 million record signing – as per BBC Sport – has yet to make his mark on the competition.

According to Albiol, who played with Ronaldo at Real Madrid between 2009-2013, the Portuguese maestro is struggling because the standard is higher in Italy’s top league than it is in Spain’s, but he still backs him to have a big impact at Juventus.

As per AS, he told reporters on Monday: “It is true that [Serie A] is more tactical and defensive [than La Liga] and also very physical, but you have to know how to play.

“Cristiano is a great player with tremendous potential, but in Italy, it will be harder for him to score 40 goals. Also, I hope he doesn’t do it, because that would be good for Juventus, but bad for Napoli.

“Last year, he also had a struggling start with Madrid.

“He did not score goals at the beginning, and at the end of the season, he finished again with some overwhelming numbers. If Cristiano has spent his entire career scoring, a bunch of goals every season is not by chance.”

The 33-year-old superstar will attempt to break his duck in Italy once again this coming Sunday when Juventus take on Sassulo at the Allianz Stadium, as the new domestic season resumes following the international break.