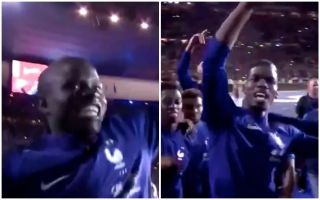 France secured a 2-1 win over the Netherlands in Paris on Sunday night and that in turn helped them enjoy their World Cup homecoming party.

Goals from Kylian Mbappe and Olivier Giroud sealed victory in their opening UEFA Nations League clash, but the game was the first at home since Les Bleus won the World Cup in Russia this past summer.

In turn, they evidently planned to celebrate with their fans after the game and fortunately after sealing three points against Holland, they were able to make the most of the party atmosphere.

Amongst those to get a special shout out in the track written to celebrate their success this summer were Chelsea midfielder N’Golo Kante and Man Utd’s Paul Pogba.

To be fair, the former needed a little encouragement as he was picked up by his teammates and placed on their shoulders as his name was sang out, although a confident Pogba was evidently loving his part.

And why shouldn’t he. After playing a starring role for France in Russia, the United superstar will hope that he can pick his form up domestically in the coming months but for now, he’s more than happy to continue to celebrate a huge achievement on the international stage that deserves the ongoing recognition and celebration.