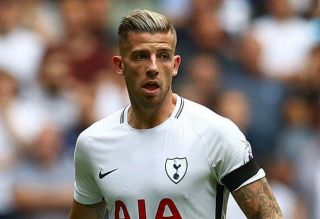 Tottenham Hotspur defender Toby Alderweireld has revealed that he never came close to leaving the North Londoners, despite interest from Man United.

The Belgian defender has established himself as one of the most reliable and accomplished centre-backs in the Premier League over the last few years, forming a stern defensive partnership for Spurs with fellow countryman Jan Vertonghen.

At international level the 29-year-old has impressed recently too, playing a key role for Belgium at the World Cup finals in Russia this summer as Roberto Martinez’ team finished in third place.

SEE ALSO: Manchester United have to pay up if they want to sign star linked with £75m Chelsea transfer
Tottenham shot-stopper Hugo Lloris defends himself after drink driving incident
Tottenham consider transfer swoop for Prem star Arsenal and Liverpool tried to sign as a teenager

Alderweireld’s performances earned him interest from Man United during the transfer window, as Jose Mourinho looked to bolster his squad ahead of the new season. According to Sky Sports, the Red Devils made contact with Spurs over a potential deal for the towering defender, however, the two clubs ultimately failed to agree on terms.

Speaking to Sky Sports on Tuesday, Alderweireld has surprisingly insisted that he did not ever consider leaving Tottenham over the summer, as he told reporters: “Everyone was saying everywhere that I absolutely wanted to leave Tottenham.

“That’s not true. This summer, I quickly understood Tottenham wanted to keep me. So, I had to battle to get my place back in the team. To be in the first team again is a victory for me.

“I just try to help Tottenham as best I can with my qualities. Regarding my future, everything that was said in the press was not right all the time.”

Spurs fans will be delighted by this latest news and will expect their star centre-half to continue performing at the same level he has done at the start of the 2018-19 campaign.

Alderweireld has started the last three matches for Mauricio Pochettino’s men, including during a 3-0 win against Man United at Old Trafford last month when he had to be at his best to deny Mourinho’s men after a first-half onslaught.

Tottenham host Liverpool next at Wembley on Saturday, where they will look to bounce back after losing against Watford at Vicarage Road before the international break.

Jurgen Klopp’s side have made a perfect start in the Premier League, but this weekend’s clash also represents the toughest challenge they have faced so far, particularly with Alderweireld standing between them and the goal as a leader in the heart of the Spurs defence.