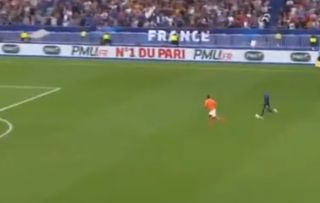 Liverpool defender Virgil van Dijk produced an absolutely superb piece of defending for the Netherlands in their defeat to France last night.

The Reds star found himself in what looked a nightmare 1v1 situation with Paris Saint-Germain forward Kylian Mbappe as the pacey attacker raced towards goal.

Van Dijk, however, kept his cool and merely jogged back into the right space before picking his moment and timing the tackle perfectly.

Fans were unsurprisingly impressed as many on Twitter shared the video and one even compared Van Dijk’s defending to Bobby Moore’s famous tackle on Pele.

We’re not sure it’s quite in that league and it didn’t come in as big a game, but this really is world class play from the Dutchman – and perfect preparation as LFC take on PSG in the Champions League next week.

Virgil Van Dijk 1 on 1 with Mbappé

If this France Holland game was in world cup that Virgil Van Dijk tackle on Mbappe would have been a Bobby Moore moment. The man is incredible. #FRANED

Great defending of Van Dijk over Mbappe.
.
The dutch defender positioned his body in the perfect position and with the perfect timing blocked the goal of the young star.
.#vandijk #liverpoolfc #netherlands #mbappe #defender pic.twitter.com/Y4y34Ozs7A

This Is how Virgil van Dijk will handle Mbappe on 18th, We ain't afraid of Neymar #VVD #YNWA pic.twitter.com/x806l0Q1d6