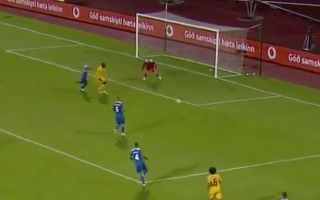 Romelu Lukaku enjoyed a productive international break as the Man Utd striker made it three goals in two games for Belgium over the past week.

His last came in the closing stages of a 3-0 win over Iceland in their UEFA Nations League meeting on Tuesday night, as he produced a deft flick to send his effort past the goalkeeper after a cross from Dries Mertens, as seen in the video below.

After netting earlier in the game, his brace against Iceland coupled with his effort against Scotland in a friendly on Friday night means that the 25-year-old has certainly had a productive international break.

In turn, Jose Mourinho will be hoping that he can pick up from where he left off with Belgium when the Red Devils take on Watford at the weekend, as Lukaku’s goals will continue to be key for them moving forward in achieving their objectives.

For now though, the Belgian forward can enjoy the moment as he played an instrumental role in the win over Iceland, as he also won the penalty which opened the scoring as Eden Hazard stepped up to break the deadlock to send Belgium on their way to a comfortable win.

As seen in the statistic below, Lukaku has now scored 20 goals in 17 appearances for Belgium since the start of last season, proving that he really is the talisman Roberto Martinez can rely upon.

He glances in after a delightful cross from Mertens! ?

With 2 more goals tonight, @RomeluLukaku9 has now scored 20 international goals since the start of last season (17 apps) – 9 more than any other player for a UEFA nation in that period pic.twitter.com/3odXDVJ3n9