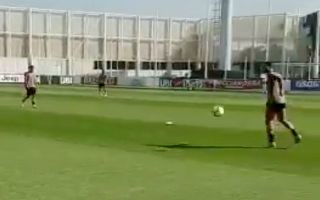 Cristiano Ronaldo is still waiting for his first competitive Juventus goal, but he clearly hasn’t lost his confidence to try new skills in training.

The 33-year-old made his move from Real Madrid this past summer as he looks to play a pivotal role in the Turin giants continuing their domestic dominance over the last seven years.

However, he has also been brought in to end their agonising wait for glory in Europe, and given his pedigree in the Champions League as a five-time winner, there’s no doubt that few are better placed to help them do that than Ronaldo.

He has struggled in his opening games for the Bianconeri though, while luck certainly hasn’t been on his side either as he just hasn’t managed to find that breakthrough to break his duck.

Juve fans will be delighted to see though that his confidence isn’t being knocked, as he casually just produced this bit of sublime skill in training on Tuesday to take down a long pass into his stride.

Just another day at the office for Cristiano Ronaldo…